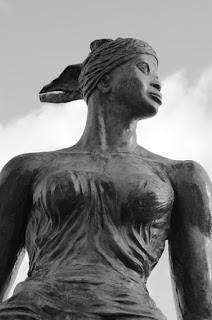 Maria (died 9 November 1716) was a Curaçaoan slave and leader of a slave rebellion on Curaçao in the Dutch West Indies in 1716.

Maria was a cook at the plantation St. Maria, owned by the Dutch West India Company, where she prepared the newly captured Africans to be sold into slavery. On 15 September 1716, the slaves of the plantation rebelled and killed some of the white staff, including women and children. The rebellion was soon subdued by the military from Willemstad. Her lover, the slave Tromp, stated under torture that Maria had planned the rebellion as she wanted revenge on the overseer Muller, who was responsible for the death of her spouse.

Maria was sentenced to death and executed by burning on 9 November 1716.

Picture: is not Maria, but from Tula slave Monument (by Nel Simon)
Posted by Sandra Rafaela