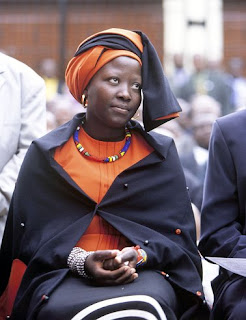 The Lovedu tribe (also called the Balobedu), a Sotho-Venda group that in 1500 settled in the north of what is now the Limpopo Province of South Africa, has the distinction that it is the only tribe in Africa still ruled by a female monarch. The successor of this ruler, called Modjadji, the Rain Queen, because of her magical powers, is designated from her matriarchal line after having been trained for years in the traditions and customs of the royal house.

Modjadji (also written Modjadje or Mujaji) can be translated as “ruler of the day”.

However, this tradition was rocked in 2005 when Makobo Caroline Modjadji VI, who succeeded her grandmother, Mokope Modjadji V, after her death at the age of 64 years in 2001, was declared queen in 2003. Mokope’s daughter Makhele, who was her designated successor, died unexpectedly three days before her mother. At 25 the next in line, Makobo, was the youngest rain queen to sit on the throne. However, she died two years later (on 10 June 2005) after a short illness. The cause of her death is unknown.

However, during her short reign Makobo Modjadji VI had the royal palace in uproar because of allegations that she rejected tribal traditions and refused to submit to the authority of the elders. Not only did she invite a male friend, the former manager of the Greater Letaba Municipality, David Mohale, to move into the royal palace where no spouse was previously allowed, but she also appointed her own “royal council” that was in conflict with the council of elders.

The conflict reached a climax when a dispute broke out between the two councils over who had the right to bury Modjadji. In the end the premier of Limpopo, Sello Moloto, had to intervene in the dispute and get both parties to co-operate. The matter was complicated because Modjadji’s brother, Mpapatla Modjadji (21), had left the palace upon her death and could not be traced. It was then decided to proceed with the funeral arrangements without him.

The funeral was attended by thousands of funeral-goers, among them many cabinet members, dignitaries and chiefs. Makobo Modjadji VI, a member of the Zion Christian Church, was laid to rest in the Maolwe royal cemetery. She is survived by her five-month-old daughter, Masalanabo.

According to tradition, tribal members must mourn for a year after the death of their queen. During this time no drums may be played and no dancing may take place. This includes the dinaka (the blowing of horns) and the sekgapa (a traditional dance for women). Learners at school are expected not to take part in extramural activities or parties.

The successor of Modjadji VI, who will reign over a kingdom consisting of more than 150 rural settlements in the Limpopo province, will be designated by the royal council. According to tradition, she must be a daughter of the deceased rain queen. However, the children of the rain queen’s maidservants, who are known as her “brides”, are also regarded as the queen’s children. 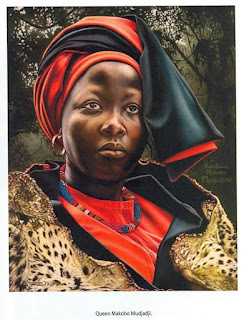 The magical powers attributed to the rain queen of the Lovedu have passed from mother to daughter for centuries. These powers not only include intervention by means of incantations and dances (such as the legobathele) during times of great drought, but also the upkeep of daily rituals. The queen’s powers are demonstrated annually during a rainmaking ceremony taking place in the Ga-Modjadji settlement.

The queen’s mace is crowned with a statuette of a wild pig or bush-pig (golove or muyane), on which the words Modjadji and Pula (rain) are engraved. The wild pig is the royal totem of the Kwevo tribe of the Lovedu.

The rain queen’s powers are traditionally used to bring not only rains to let the harvests grow and fill the rivers, but also fierce storms and floods to keep her enemies at bay. For this reason the Lovedu do not make use of warriors to protect the tribe.

The queen is advised in her duties by a rain doctor or doctors, who are blamed if the queen’s rainmaking rituals do not succeed. Should no success be attained in the long term, it is presumed that the ancestors are dissatisfied and that their favour must first be won, usually by means of sacrifices.

According to tradition, the rain queen may not marry, but a suitable man from the family is designated for her by the royal council when she decides to have a child. The rain queen is served by so-called “brides”, whose children are also regarded as hers.

After the death of a rain queen the entire tribe mourns for one year. Her death may actually not even be proclaimed officially before the end of this year. Her royal council designate her successor, who must be one of her daughters.

According to legend, the rain queen of the Lovedu descends from the royal house of Monomotapa who reigned in the 1400s and 1500s over the territory now known as Zimbabwe (see article: “Africa kingdoms, Early systems of government”). At the time it was inhabited by the Karanga tribe.

In the 1580s the royal house experienced a scandal when one of the princes had a relationship with his sister, Dzugundini. The relationship produced a son. To prevent a civil war, the king banned his daughter and her son from the kingdom of Monomotapa, but not before giving her a horn with magical rainmaking powers. She settled on the opposite side of the Limpopo River – where her descendents still live today. The magical powers were passed along the female line from mother to daughter.

In 1800 Maselekwane, who descended from Dzungundini, was for the first time officially crowned as rain queen and took the name Modjadji I. Her reputation as a rainmaker was so respected that even Chaka, the king of the Zulus, turned to her for help to relieve Zululand from a prolonged drought.

Modjadji III, her successor, was herself an exceptional woman who ruled for 63 years as rain queen. She was born in 1870 and died on 20 February 1985 – in the ripe old age of 89 years. Unlike her predecessor, she was known for her hospitable nature, wisdom and sense of justice.

During her reign the royal kraal of Modjadji was proclaimed a national monument (1936). This kraal is situated in the Modjadji Kloof in Limpopo, characterised by the largest concentration of bread trees – called Modjadji bread trees – in the world.

Mokope Modjadji V was honoured by a visit from former president Nelson Mandela, who gave her two vehicles for her personal use. She was also honoured by the South African weather service for her contribution to South Africa’s rainfall.

Makobo Caroline Modjadji VI was inaugurated as rain queen on 11 April 2003. She was only 25 years old. Not only did that make her the youngest rain queen in the history of the Balobedu, but she was also the first rain queen to have completed her school career – at the Masalanabo High School in Khetlhakone/Sehlakoni, next to the royal palace. (The settlement is approximately 100 km east of Polokwane, capital of the Limpopo province.)

Her short reign nevertheless conveyed the message that even the centuries-old tradition of Modjadji would have to adapt to modern times.

Makobo Modjadji VI’s daughter, Masalanabo, who was five months old when her mother died, is named after Modjadji II, the most famous of all rain queens.