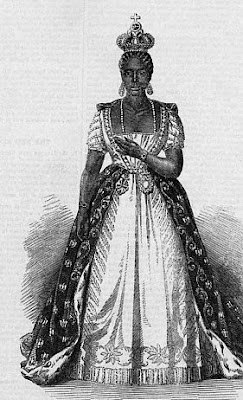 
Adélina Soulouque, née Lévêque, was Empress Consort of Haiti from 1849 until 1859, as wife of Faustin I of Haiti.

Adélina was the daughter of Marie Michel Lévêque, a Haitian of mixed-race heritage. She had a long-term relationship with Faustin Souloque for many years. It was only in December 1849 that Adélina married her long-time companion Emperor Faustin. On 26 August 1849 she was given the title Empress of Haiti with the style of Her Imperial Majesty, and crowned with her husband at the capital Port-au-Prince on 18 April 1852; both emperor and empress were crowned in an immense and lavish ceremony that emulated the coronation of the French Napoleon I of France. Her sister was styled Her Serene Highness Princess Clélia.

Faustin's marriage to Empress Adélina produced one daughter, Princess Célita Soulouque, who had no issue. The emperor also adopted Adélina's daughter, Olive, in 1850. She was granted the title of Princess with the style Her Serene Highness. She married Jean Philippe Lubin, Count of Pétionville, and had issue.