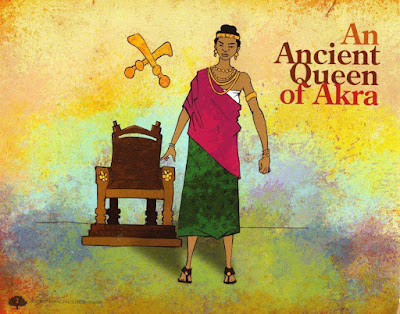 Dode Akabi’s easy acession to power and her long reign (1610-1635) obviously suggest the degree of assimilation of previously non-Gá peoples.

However, Dode Akabi’s has hitherto been treated rather unfavourably by historians. Reindorf relates a series of brutal decrees issued under her authority; she was finally killed after she had ordered her subjects to sink a well at a place called Akabikenke.

Her accession to power as the first major female figure in Gá, and indeed Gold Coast, history should certainly rank as a remarkable event attesting to the skills of this powerful personality; Dode Akabi certainly displayed the ruthless decisiveness that has marked the careers of admired male statesmen the world over. Her alleged atrocities aside, Dode Akabi appears to have kept the kingdom intact. However, the manner of her death indicates a degree of dissent among her subjects.

Dode Akabi’s regency and greatness is, perhaps, best analysed in the context of her role in the evolution of chiefship in the Gold Coast. Until her acession to power, chiefship appears to have been a male preserve. The chief in the theocratic state of Accra was by definition also a high priest or wulomo; he took a personal part in ritual dancing. As the high priest could only be male, Dode Akabi’s rise to power necessarily entailed a schism between the powers of the wulomo and that of the king; this marked the secularisation of Gá-Dangme politics, and the concentration of religious authority in the hands of the wulomei.

Since her authority, unlike her predecessors’ was no longer derived from privileged access to the Deity, Dode Akabi had to formulate new methods of governance; this she did principally through the previously untried method of direct legislation which appears to have so drawn the ire of her subjects. She brought a new magnificence to royalty, chiefly by combining Western luxury with new standards of culture.

Analysed this way, Dode Akabi emerges as a formidable figure whose rise as the first female political leader of the Gold Coast opened new vistas of power to her gender. She is generally believed to have introduced much display, jewellery and colourful attire into the institution of chieftaincy; some even attribute the custom of sitting on stools to Dode Akabi. Prior to Dode Akabi stools were mainly taken into war, and held aloft to lift the spirit of the troops; popularly regarded as having no authority from the Deity, she demanded to sit on the war-stool to visually symbolise her authority over her people.

The reign of Okaikoi was the beginning of a fresh assertiveness by the Gá-Dangme. Okaikoi’s power was based largely on the cult of the warrior, signalling the final shift of power from priest-kings to secular kings whose power rested almost exclusively on their ability to manipulate and control affairs within the Gá-Dangme polity.

Okaikoi appears to have continued Dode Akabi’s policy of political control of his subjects, casting aside the previous practice of rule by consensus and through the authority of the Deity; it was the first major challenge to the theocratic basis of Gá-Dangme kingship. Surrounding himself with a body-guard of selected youth, Okaikoi demanded unlimited recognition and subservience from both subjects and conquered peoples; he also institutionalised the practice of princes of provincial states serving as armour-bearers in the king’s court, formalising a practice which had always existed among the Gá-Dangme in a more general form.