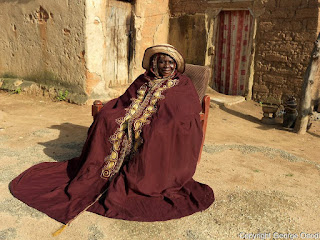 Kumbwada, in Nigeria's conservative Islamic north, where strict Sharia law is the rule, has never had a male ruler.

The present ruler is.

The Queens palace is a shack with a rusted corrugated roof, but her rule over the 33,000 citizens is unquestioned, as was that of her grandmother before her who lived to the age of 113.

"There has never been a male ruler," the queen says, chuckling, a sound like dry, crackling paper.

"Even my father just voiced his desire to be chief, but it almost killed him."

"It's a women's affair, women are the rulers and they rule as effectively as men, sometimes even better than men."

As the traditional ruler, the queen handles disputes such as quarrels over land, divorces, petty violence, accusations of theft and arguments between neighbours.

Government courts step in only if a traditional ruler refers a case or if the situation isn't resolved to everyone's satisfaction.

"When domestic issues come to me, the way I treat them will be quite different to other traditional chiefs," she says. "I'm a woman and I'm a mother and I have so much concern and experience when it comes to the issue of marriage and what it means for the maintenance of the home and what it means for two people to live together." And of course she doesn't tolerate wife beating.

Queen Hajiya had one wife-beating case early in her reign.

"I told him if he ever beat his wife again, I'd dissolve the marriage and put him in prison," she remembers. "Marriage is not a joke, and women are not slaves."

Since that case, she has made a point of campaigning against domestic violence whenever she holds court in local communities. She says she's never had another beating case. People know where she stands.

"Men sometimes say the women provoke them, so that is why they beat them," she says. "I tell them that there's no justification, whatever happens."

A Woman President in Nigeria

She often addresses women's groups, urging members to become educated so that they can be future leaders. Most of all, she wants to live to see a female Nigerian president.

"It's my most ardent wish. I think the problems in Nigeria have become intractable. Let's try a woman. Men have failed."

"I've never had a crisis I couldn't solve," she says.

"In a crisis, people don't listen to politicians. Once we intervene, once we speak, to the people, it's hands off."

"The royalty have a very important role in Nigerian society," the queen says. "Of course we're different than the elected powers. The real power, the confidence, is with us. Politicians think you can buy votes.

"I am closer to the people. The traditional rulers are the ones the people trust."