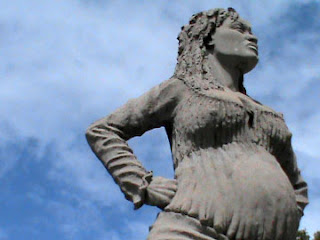 A revolution of enslaved plantation laborers in Saint-Domingue (now Haiti) begun in August 1791 forced France to legally abolish slavery in its colonies less than three years later. By 1802, however, Napoléon’s forces sought to resurrect the sugar-based economies of Saint-Domingue, Guadeloupe, and other French holdings in the Caribbean by re-enslaving freedpeople who had been living as French citizens for eight years. Africans and their descendants fiercely resisted French forces—successfully in Saint-Domingue, unsuccessfully in Guadeloupe. Though little is known of her early life, Solitude is celebrated as a heroine in Guadeloupe for her role in that struggle for lasting freedom in 1802.

Solitude had joined the maroon settlement of La Goyave in the mid-1790s, and during an attack by French General Desfouneaux, she became the leader of a small group that escaped to the hills of Guadeloupe, eluding capture. On May 5, 1802, French ships arrived in Pointe-à-Pitre carrying troops ready to enforce Napoléon’s decree to reinstate slavery on the islands. Battles erupted as Africans and their descendants fought to preserve their freedom.

Solitude, now pregnant, mobilized her followers to join the forces of Louis Delgrès against the French military. They struggled until they were surrounded and outnumbered by the French troops at Danglemont Plantation. Delgrès and approximately five hundred troops allowed the French soldiers to advance into their territory before igniting stores of gunpowder. The strategic suicide plan resulted in the death of approximately four hundred French soldiers. Though most of the maroons died, Solitude survived and was captured and detained in Basse-Terre prison.

The French military brought Solitude and the other survivors before a military tribunal, which sentenced them all to death. Solitude was temporarily pardoned until she gave birth to her child, who became the legal property of her owner. One day after delivering her baby, on November 28, 1802, Solitude was executed. She was thirty years old.

After her death, Solitude disappeared from the annuals of history until the 1960s, though by that time her contemporaries, such as Delgrès, were recognized. Today, Solitude’s name adorns squares, avenues, a library, and a museum room in Guadeloupe. Solitude’s bravery and courage is remembered in songs, poems, and the musical Solitude la Marronne.