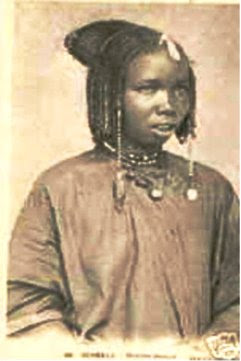 
Vita kimpa was born in 1687 in the village called songololo, in the town of Bakongo at the time when the country was the Kingdom of Kongo Dia Ntotela.

At this time Ancestral religion worship was banned and the occupiers imposed their religion which was Christianity.

Vita Kimpa was one of the people who used to attend the teachings. At this time she was 17 years old, her parents were Christians. When ever they came to hear the teachings of Mama Mafuta, Vita Kimpa used to possess the spirit.

The news soon reached the white Christian priests, who were against them. They ordered a total ban of the meetings, but the people continued to worship in their Ancestral way. 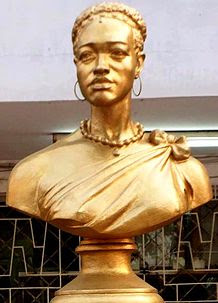 One day Vita Kimpa became sick and died. In the traditional way, the elders came together for her burial, but because her father was away, they decided to wait until her father could be found. Three days later, he still had not returned and the villages decided to continue with the burial.

On the way to the burial site Mama Vita Kimpa rose up and asked them what they were doing! the elders replied that they thought she was dead. Mama Vita Kimpa told them that she felt a lot of pain, so her spirit came out on top of her head and an Ancestor came and took her to a very beautiful city in the sky. She receive teachings here and was then sent back.

The mission the Ancestors gave to Mama Vita Kimpa was to wake up the people and unite the two Kingdom,s and rebuild the city of Mbanza Kongo (the City of God) which had been destroyed by the Portugueses. Mama Vita Kimpa went on to say that they should choose a King, who she would ‘bless’, then her mission would be completed.

The people were astonished to hear what the young girl had recounted subsequently from that day Vita Kimpa grew in force and continued to preach about spirituality and manifested many miracles, raising the dead and healing the sick. When fasting for long durations of time, 14-40 days, her body would begin to decompose until her spirit returned and her body would be restored.

After spiritually waking up the people she instigated the return of the Ancestral religion. There followed a decline in Christianity, and the people returned to the ways of their ancestors. The invading Christian Clergy heard of this, and made plans to kill Mama Vita Kimpa.

The unification of Mama Mafuta`s group and that of Mama Vita Kimpa’s, gave birth to one group practicing in their ancestral ways. By this time Mama Mafuta was to old to travel, so Mama Vita Kimpa continued the work of preaching and teaching. Many people were convinced by Mama Vita Kimpa`s works, the symbols of power were regained, and feuding parties ceased to fight amongst themselves.

Mama Vita Kimpa eased the tensions and was a guide to both Kings. She rebuilt the city of Mbanza Kongo, which defied the ban imposed by the Portuguese. No black man was allowed to enter the ruined City of Mbanza Kongo, since it had been burned to the ground.

The time finally came to choose the King. She asked all the chiefs of the clans to cast their nominations on who would become King and for the choice to be fair. The candidates then had to fast for 40 days.

The groups split up, and the group of Vita Kimpa went far into the bush to fast. When the news reached the colonialists that Vita Kimpa had gone into the forest with the intention of choosing a King, they decided it was time to kill her. The location of Mama Vita Kimpa was submitted by an informant to the Portuguese. When located,they arrested her , killing all present with her. she was taken alone to a place called Divululu, a mountain where she was tortured and beaten continuously to renounce and reject her Ancestral teachings. As a means of recapturing the minds of the people, her captives demonised her stating that she was commiting evil works . But vita kimpa refused to denounce the work she was given by the ancestors. Because of that she was burned alive by the Portuguese, Vita kimpa was only 17 years old when she died.

Vita Kimpa refused to dismiss the word of God,
She was burned alive on the 2nd July 1706.