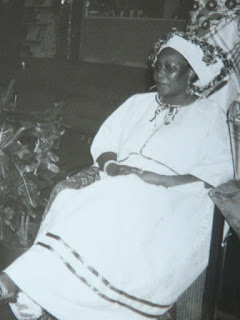 "Gone but not forgotten and therefore posted so we will not forget the efforts of our Ancestors."

Out of Slavery begins around 1770 when Ma Uwa and her daughter Ma Amba were brought to Suriname as slaves from Africa.

The oral tradition goes back to Mother Africa. The first women in Broos and Kaliko’s settlement,
Ma Uwa and her daughter Ma Amba were born in Africa. Ma Amba was still a girl when they arrived in Suriname. We do not know how they fell into the hands of slave-hunters, but according to the oral tradition Ma Uwa was not the only member of her family to make that dreadful journey from Africa to Suriname. Two or three of her brothers and a sister were also chained down in the hold of the slave ship. Once they arrived in Suriname they were sold to different plantation owners and sent to various parts of the country.

Ma Uwa and Ma Amba were very knowledgeable about healing herbs.‘You could see Ma Uwa sitting on the ground with a big white sheet in front of her. On the sheet was a white bowl. Her watchword was adaya, adaya popo! Ma Amba’s favourite herb was lowisa- w’wiri, which she used to make her obias (magic potions). Ma Amba was a typical African woman; when she prepared her herbs, young girls had to crush them – girls who had not yet menstruated, young virgins.

‘Ma Uwa and Ma Amba could hear danger coming from far away. They could hear the sound of horses’ hooves across amazing distances. This gift was attributed to the winti (gods) they had brought with them from Africa, who would warn them of approaching danger.

They also gave Ma Uwa and Ma Amba kibri obias, magic amulets that made the wearer invisible. For example, if the bakras (Dutch) saw a tree as they were walking through the forest, it might not have been a tree at all, it might have been a Maroon from Broos and Kaliko’s encampment!

Through the knowledge Ma Uwa the Maroons were able to fight the Dutch and remain free during slavery.

Another example:
A bakra might think to himself “there’s a mosquito” – but who knows – perhaps it wasn’t a mosquito at all! Ma Amba was Broos and Kaliko’s mother. She was still alive at the time of emancipation and appears in the Emancipation Register as Daphina Babel.

Her younger sister Antje also lived in the encampment and their descendants chose the name Babel as their surname. Another important woman in the village was Ma Mofina, the progenitor of the Landveld family. 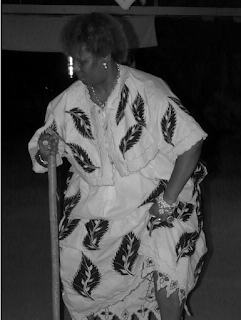 Ma Uwa does not appear in the Emancipation Register. By 1863 she was no longer living in the encampment. Had she died? According to her descendants, she had not. ‘Ma Uwa never died. Her body was never found. She flew home to Africa. She could do that because she had never eaten salt from the bakras. In fact they should all have been able to fly home to Africa, these Africans who had come to live in Broos and Kaliko’s encampment, but unfortunately, for many it was no longer possible because they had eaten the white man’s salt. That was taboo, a treef.

After they left Africa, most of the Africans ate only their own salt, made from the maripapalm. But some, such as Ma Amba, used the bakras’ salt during the days of slavery.
That is why they could never return to Africa.

One day Ma Uwa said she was going to fly home to Africa, but those who had eaten salt from the bakras couldn’t do it. They waved their arms but they could not get off the ground. They jumped in the air, trying to fly, but they fell back down again. Ma Amba could not fly either. The others shouted, “Fly!” but it didn’t work. They kept falling down again.