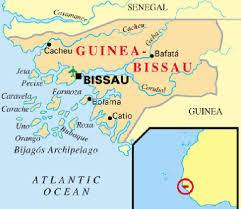 
Around 1830-1874/1879 Reigning Okinka Aurelia Correia
Her kinship relations with ruling Bijago lineages and her supposedly “queenly” status led contemporary chroniclers to put her in league of her own. The sources refer to her as "Queen", but the position of Monarch was reserved for men. But it seems that she reigned in the absence of as a male ruler by the virtue of her office as Okina, the Pristess charged with the protection of the ancestral spirits, and as such she was supported in her reign by a Council of Elders. Some have suggested that she was of Pepel descent, captured in a Bijago raid and raised on Orango. A colonial reference suggests that her mother was an Okinka from Orango and her father was a Cape Verdean trader. She married Governor Caetano Jose Nozolin.

Circa 1910-30 Reiging Okinka Pampa Kanyimpa
Also known as Kanjimpa, she succeeded her father Bankajapa, abolished slavery, extended women’s rights, and brought reunification to the Orango Grande islands. She was greatly loved by the Bijagos and respected by the Portuguese colonisers during the war of pacification to subjugate the native tribes. It was she who reached a peace agreement. (d. 1930).