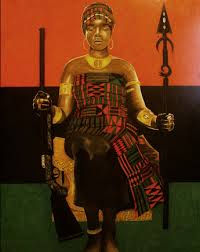 A subgroup of the Akan, the Anyi people migrated to the Ivory Coast from Ghana between the 16th and 18th centuries. They were never quite as powerful as the Asante and Baule, and as a result were indirectly under their respective rules at the height of both empires. The Baule Empire that rosed up from 1720 between the Bandama and the Comoe Rivers was the result of Family feud that arose between the then Queen Mother of Asante Nana Abenaa Pokua during the death of Nana Osei Tutu I and Her GrandNephew Nana Opoku Ware I who assassinated his Grand Uncle Nana Darko, the brother of Nana Abena Pokua.

This incident brought about the civil war that engulfed the Asante Kingdom between 1717 to 1720 The incident split the Kingdom into two and the then united Oyoko-Dako Clan were also divided. The Oyokos who were the nephews of the Adakos, headed by Opoku Ware, kept control of Oyoko clan and the Golden Stool, whereas Nana Abena Pokua the QueenMother moved to Kaase (then Kwaman) with her partisans numbering about 3.5 million half the population of Asante moved and settled with the Anyi, Nzema and the Sanhwi to the west of Asante. Nana Opoku Ware was entooled as Asantehene and his mother Nana Nyarko Kusi Amoa, the niece of Nana Abena Pokua was also entooled as the Queen mother of Asante in 1720.

Between 1720 and 1730 Nana Abena Pokua, faced with many obstacles, confronted life with determination, living among the Nzima/Anyi and Safwi, She adopted their language and even cange her name from Abena Pokuaa to Abla Poku thus delinking any ties with Asante. Nana Abla Pokou in order to cross the River Comoe to escape the partisans of Opoku Ware who were sent to return the partisans of Nana Pokou back into the Asante Kingdom, had to sacrifice her son to the River Comoe before they were able to cross the river with her partisans. After crossing the River Comoe Nana Abla Pokou and her various warrior Groups started to settle each to ts location. The Kyidom warriors (Akye) settled immediately after the river Comoe to guide the route to Asante. They kept the Golden UMBRELLA and the sword of Nana Osei Tutu. The Abbe (Torchbearers) also settled after the Akye and the Mbatto, Ebrie and all the other foot Soldiers settled in the regions that is today Akan land in Ivory Coast.

In accordance to akan tradition, after the consolidation of the new Kingdom, after meeting fierce resistance from the defeated for Lords of the Akan the Denkyira, Nana Abena Pokua defeated them in war and subdued them and thereby established the Baule Kingdom. By 1730 Nana Abla Poukou was entooled as the First Reigning Queen of the New Akan Kingdom of Baule after the death of Nana Osei Tutu I. thereby with the stools of Obiri Yeboah and DENKYIRA UNDER THE CONTROL OF THE NEW KINGDOM, Nana Poukou established Baule Dakon Clan as the undesputed leader and Ruler of the Akans. Below are the Ruling Akan Rulers who ruled after the death of Nana Osei Tutu I, King of the Asantes and the Baules.

Beretuo Dynasty 1717 to 1720 Amaniampon, the Mamponghene Regent, Mamponghene became regent due to the assassination of Nana Dako during the contest for the Succession to the throne after the death of King Osei Tutu the civil that ensued lasted for 3years 1717-1720 that led to the migration of Nana Abena Pokua and the Adako Dynasty to Cote d’lvoire and the founding of the Baule Kingdom.

The Death of Osei Tutu came about due to ill advise on the part of his young determined warriors who wanted so much to carry on with the war to conquer the entire Akan Kingdom. But with the killing of Ntim Djakari, the Asantes defeated the Dankyira, but because the Denkyira ran away with the Akan Unifying throne (Amprofi Tutu (Tanou) Matriarchal Throne) King Osei Tutu I remained only the King of the Asantes and not the Akans in the absence of the Amprofi Tutu Throne.

He therefore forged ahead defying all advise of the Seers and the Queen Mother, The Young Brave Warriors led by Opoku Ware continued their campaign, waging war against the Akyem and all other Akans. One faithful day while fighting King Osei Tutu tried to cross the River Pra in to the Akyem Strnghold , but the Akyems Led by Owiusu Akyem Tenten resisted and in the processed shot King Osei Tutu who felt in the River.

His Corpse was never recovered till this day. After the death of Nanan Osei Tutu, Nanan Abenaa Pokuaa and her Council of Elders upon hearing the news and consulting with the Oracles of State, decided to nominate Nana Darko to succeed Nanan Osei Tutu but the nomination was not pleasing to Opoku Ware, so he and his partisans rebled and killed Nana Darko, this brought about the Civil War that lasted three years 1717 -1720.

By 1720, Nanan Abenaa Pokuaa decided to end the war and moved out of Asante, They moved through Techimantia to Akomadan to Tanoso where they settled with the Atanno Deities. There at Tanoso the Adako Royal Family and the Elders prepared and Those who could accompany on the trip West decided to go with Tano Akora, while Tano Apem and the other Gods stayed with after preparations, portion of the Family left with Nana Abena Pokuaa and the Adako Partisans.

After arriving at Werebou The Queen Fought to establish herself and build a new Cite of Tanou Sakassou as the Capital of her new Kingdom, She Help established all the other members into various communities and chiefdoms, But She was confronted by the Denkyira Remnants who took away the Amprofi Tutu Matriarchal Unifying throne . They wanted to avenge the killing of their King Nana Ntim Djakari, so they mobilized and attacked Nanan Abla Poukou's Settlements. Nanan fought back and defeated the Denkyira and recaptured the Akan Unifying Throne. This made Nanan Abla Poukou the Cuatodian of three Stools the Obiri Yeboua Stool of Kwaman, The Comoe Stool after the sacrifice and crossing the River Comoe and the Amprofi Tutu Matriarchal Throne.