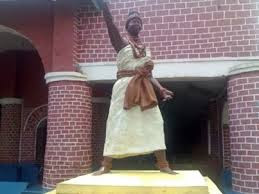 Moremi was a very brave and beautiful woman who, in order to deal with the problem facing her people, offered anything she had to give in sacrifice to the Spirit of the river Esimirin so that she could discover the strength of her nation's enemies.

Moremi decided upon a strategy. She went to the nearby river Esinmirin, and vowed to deity that she would make the greatest sacrifice possible if they allowed her to discover the strength of her nation’s enemies. She then went to a place that was raided frequently, and when the raiders did come she allowed herself to be captured. Being very beautiful she was taken as booty to the Igbo King. She was very confident and skillful, and soon won the trust and affection of the King and people in Igbo land. She became familiar with their customs and tactics of warfare. She found that the Igbo, in preparation for battle, would cover themselves from head to toe with Ekan grass and bamboo fibers. She realized that if someone could pass amongst the Igbo warriors with a torch that they could be defeated.

Feeling that she had adequate knowledge, she escaped, to the great surprise of her Igbo captors. She returned to her first husband, King Oramiyan of Ife (and later Oyo), who immediately had her re-instated as his Princess Consort. Knowing the warfare secrets of the Igbo, the people of Ife were forever freed from the terrors of these previously invincible warriors.