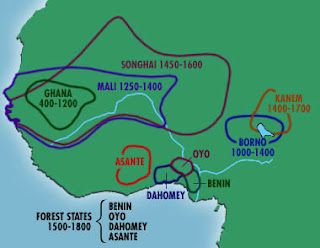 
Hangbe (also Ahangbe or Na Hangbe) was the Ruler of the Kingdom of Dahomey, in present-day Benin, for a brief period before Agaja came to power in 1718. Little is known about her because her rule was largely erased from the official Dahomey history and much that is known is brought together by various different oral histories.[1] However, it is often considered that she became the ruler of Dahomey upon the sudden death of King Akaba because his oldest son, Agbo Sassa, was not yet of age.[2] The duration and extent of this rule is not generally agreed upon. She supported Agbo Sassa in a succession struggle between him and Agaja in 1718. Agaja became King of Dahomey and, because of her support for his opponent, her legacy was largely erased from official history.

Hangbe was born to Houegbadja as the twin sister of Akaba. The twins had a younger brother named Dosu, who later took the name Agaja, which is the traditional name given to the first son born after twins.[1] Akaba became the King of Dahomey around 1685 and Hangbe became an important part of the royal family as the oldest sister of Akaba.

Oral histories agree generally that Akaba died while engaged in military combat in the Ouémé River valley in 1716, but the histories disagree about the cause of death whether in battle, poisoned, or smallpox. Regardless, between his death and the appointment of Agaja in 1718, oral traditions say that Hangbe was the ruler of Dahomey, as regent.[2] In one version, after Akaba's death, Hangbe put on his armor and continued leading the forces in the Ouémé River valley.[1] Between 1716 and 1718, Hangbe continued the warfare started by Akaba in the Ouémé River valley and may have led additional military expeditions.[2] Her rule is generally considered to have lasted either three months or three years.
Succession struggle

In 1718, Hangbe supported the rule of Agbo Sassa, the oldest son of Akaba, to the throne of Dahomey. Her younger brother Dosu (later Agaja) contested this rule and this caused a significant succession struggle between Agbo Sassa and Dosu. Some versions claim that the royal court was displeased with the perceived bacchanalian and decadent lifestyle of Hangbe and so instead choose Agaja.[1] Others contend that the court was afraid of creating a split dynasty, with the children of Hangbe and the children of Akaba having equal right to claim the throne, and so preferred Agaja to clarify dynastic line of succession.[3] Regardless, the struggle did not last long and Agaja became the King of Dahomey. Oral traditions disagree on what happened afterwards. One version recounts that her only son was put to death to prevent any claims to the throne, while Hangbe, disgusted with the choice of Agaja and the execution of her son, stripped naked in front of the council and washed her genitals in a show of contempt for their decision.[1] Other versions have her son remaining alive but an angry speech by Hangbe directed at the councils included a prediction that this would lead to the conquest of Dahomey by Europeans.[2] Other oral traditions connected with her surviving lineage suggests that, while Agbo Sassa fled north to live with the Mahi people, she and her family remained in Abomey and, under King Ghezo in the early 1800s, the house and lineage was provided significant funds to maintain its presence.[2]

Hangbe's descendents live to the current day in a compound next to the Royal Palaces of Abomey and recount seven descendents acting as head of the Hangbe lineage.[2] In some versions, it is considered that Hangbe was he main person responsible for the creation of the Dahomey Amazons, a military unit composed entirely of women. Most scholars do not consider this likely.[1] She is not included in any kings lists for the Kingdom of Dahomey.[2]