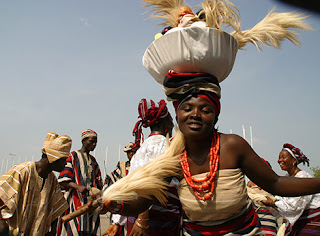 The Osemawe title of Ondo Kingdom was instituted in 1510, when Princess Pupupu, a powerful daughter of the late Alaafin of Oyo, King Oluaso left the palace with the Royal entourage in a bid to settle far from her father's palace.

She settled on a hill called Oke Agunla in Ondo town On arrival of this Princess at Oke Ogunla a smoke rising from far below was spotted by a man called Esiri who traced the smoke to know its source. On getting to the hill where the smoke was spotted, he met Princess Pupupu and her royal entourage. He took them to a village in Ondo Kingdom called Oriden. The villagers were very happy to meet the powerful princess and exclaimed Edo du do, edo do, idi edo!!! Where the name of the Kingdom Ondo Kingdom was formed.
Rulers

Princess Olu Pupupu ascend the Throne as the first Osemawe of the Ekimogun people of Ondo Kingdom and reign from 1516 to 1530. Before her death, she gave birth to two sons, the eldest was named Airo Pupupu and the younger one was named Luju Pupupu. Airo Pupupu later ascends the Throne after the demise of his mother in 1530.