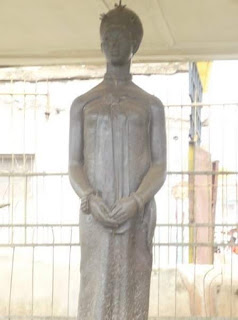 "EDO - AFRICAN WOMEN HAVE BEEN HELD HIGH, RECOGNIZE AND IN SOME CASES DEIFIED. THERE WERE TWO WOMEN RULER IN EDO KINGDOM, NAMELY OGISO EMOSE AND OGISO ORRORRO. EDO WOMEN PLAYED A VERY SIGNIFICANT ROLE IN THE BUILDING AND SUCCESSFUL ADMINISTRATION OF THE GREAT BENIN KINGDOM. THE POPULAR FESTAC, AND MASTER SYMBOL OF THE EDOID NATION WAS THE HEAD OF THE "IDIA NE IYE ESIGIE", WHO WAS DEIFIED AND HONOURED BY OBA ESIGIE WITH THE TITLE OF "IYOBA", BASE ON HER GREAT CONTRIBUTION TO THE GROWTH AND DEVELOPMENT OF THE BENIN EMPIRE. TALKING ABOUT GREAT AFRICAN WOMEN IN HISTORY BESIDE OGISO EMOSE, OGISO ORRORRO, IDIA NIYESIGIE WAS PRINCESS EMOTAN."

In the last couple of years, black people all over the world have found and continue to take pride in what colonialist used to describe as primitiveness. They have come to realize that while these Europeans in one hand were condemning African culture and works of art made and adorn by Africans, they were carefully stealing and smuggling the great works of arts with the other hand. The interesting thing about African art in general is that they are closely tied to African history, spirituality and social life. Despite the lack of much consideration given to women in the Edo society today, Edo women of yesterday years were not only very recognise and respected, but the role they played in societies were greatly appreciated and rewarded respectivelly.

Emotan was an ordinary petty trader who used to sell foodstuffs in the Oba market during the reign of Oba Ewuare the Great which historians have placed at about 1440. She have been actually trading since the reign of Oba Uwaifiokun, who reign before Ewuare. Both these men were brothers. 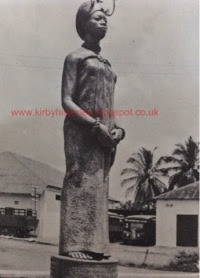 Ewuare was one of those legends whose history will sound to modern days youngsters like fables rather than realities. Ewuare was a great king, a magician, reputable leader and warrior. He made many enemies and one of those was his brother Uwaifiokun. It was agaisnt this Emotan was helpful. Ewuare's brother, Uwaifiokun who was still reigning, had conspired with his cheifs to have Ewuare murdered. Emotan got the wind of the conspiracy, took the risk to unveiled it to Ewuare. She not only told Ewuare the plan to murdered him but joined to protect and hide him from being killed. Ewuare was saved thanks to her. When Ewuare became the Oba of the Benin Kingdom, Emotan became a favoured citizen. When she died Ewuare ordered that her body be buried at the Oba market in the n the same spot where she use to trade. A tree was ordered by the Oba to be planted on the gravesite. Not only that, Ewuare also deified Emotan who was worshipped as the mother of love and kindness. In the past every man attended all funeral procession, invested, celebrated, visited the tree and gravesite at the City Center.

Oba Ewuare Nogidigan also recognised one of his servant who saved him too from a terrible illness. He changed the name of Igodomigodo (The Edo Coutry) to "Edo" after his deified (servant) friend, who was able to save him from a sudden death in about same time with Emotan deitification. Before this time, the Edoland and country had been called the land of Igodomigodo. Oba Ewuare Ne ogidigan (The great), reign in Benin Kingdom about 1440 to 1473 in the second milenium. From Ewuare, Edo became the name of the Ancient Benin Kingdom, their language and territory.

Today in Benin City, Emotan's beautiful statue conspiciously stands where she was first Buried during the reign of Oba Ewaure Nogidigan. It is in this regard that one sees the permanent statue unveiled and lunched by Oba Akenzua II on march 20, 1954 in honor of Emotan in the heart of Benin City as a great gesture