History of Africa by Zeinab Badawi 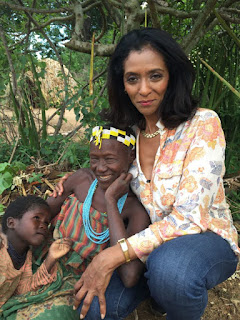 Zeinab Badawi (Arabic: زينب بدوي‎; born 24 November 1959)[1][2][3] is a Sudanese-British television and radio journalist. She was the first presenter of the ITV Morning News (now known as ITV News at 5:30),[4] and co-presented Channel 4 News with Jon Snow (1989–98), before joining BBC News. Badawi was the presenter of World News Today broadcast on both BBC Four and BBC World News, and Reporters, a weekly showcase of reports from the BBC.[5]

Badawi was born in Sudan[1] and has lived in Britain since the age of two. Her grandfather, Sheikh Babiker Badri, fought against Kitchener's British forces at the Battle of Omdurman in 1898 and pioneered women's education in Sudan. Badawi's father was a newspaper editor in Sudan committed to social reform who, when the family moved to the UK, joined the BBC's Arabic Service.[6] Badawi speaks Arabic but not fluently.

She was educated at Hornsey High School for Girls in North London, before studying Philosophy, Politics, and Economics (PPE) at St Hilda's College, Oxford. At Oxford, Badawi was a member of the Oxford University Broadcasting Society.[7] In 1988 she moved back to London to pursue a full-time one year MA degree at School of Oriental and African Studies (SOAS), University of London in Politics and Anthropology of the Middle East, graduating with distinction in 1989.

After graduating from Oxford University, Badawi was a researcher[8] and broadcast journalist for Yorkshire TV from 1982 to 1986.[9] After a period at BBC Manchester she joined Channel 4 News in 1988.[9] Badawi co-presented Channel 4 News from 1989 until 1998 when she joined the BBC.[1]

At the BBC Badawi worked as presenter and reporter for Westminster live political programmes for five years. She also worked on BBC radio as a regular presenter of The World Tonight on Radio 4 and BBC World Service's Newshour.

In 2005, Badawi became the new presenter of The World on BBC Four, the UK's first daily news bulletin devoted principally to international news. In May 2007 the programme was rebranded as World News Today and is also shown on the BBC World News channel.

She is a regular presenter of the BBC interview programme HARDtalk. In an exclusive interview in May 2009, Badawi interviewed Sudan's President Omar Al-Bashir, the first serving head of state to be charged with war crimes.[6]

In November 2009, Badawi was named International TV Personality of the Year in the Annual Media Awards, the international media excellence awards organised by the Association for International Broadcasting.[10]

Since 2010, in addition to her presenting role on BBC World News, Badawi has presented on the BBC News Channel and the BBC News at Five.[11]

Badawi was awarded an Honorary Doctorate of Letters by the School of Oriental and African Studies (SOAS) in recognition of her achievements in journalism on 21 July 2011.[12]
In May 2014 she was based in Johannesburg presenting coverage of the South African elections on BBC World News and BBC News Channel.

For many years,[when?] Badawi has led an annual Nobel laureate discussion in connection with the Nobel festivities in Stockholm, Sweden. The programme is shown on Swedish television.

Badawi has been an adviser to the Foreign Policy Centre[13] and a Council Member of the Overseas Development Institute.[14]

In June 2011 her appointment to the advisory board of the New College of the Humanities was announced.[18]

Badawi is founder and chair of the Africa Medical Partnership Fund (AfriMed), a charity which aims to help local medical professionals in Africa.[6]


USING AFRICAN HISTORY AS A TOOL FOR CHANGE