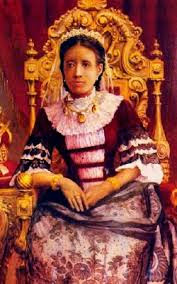 
Ranavalona III (November 22, 1861 – May 23, 1917) was the last sovereign of the Kingdom of Madagascar. She ruled from July 30, 1883 to February 28, 1897 in a reign marked by ongoing and ultimately futile efforts to resist the colonial designs of the government of France. As a young woman, she was selected from among several Andriana qualified to succeed Queen Ranavalona II upon her death.

Like both preceding queens, Ranavalona entered a political marriage with a member of the Hova elite named Rainilaiarivony, who in his role as Prime Minister of Madagascar, largely oversaw the day-to-day governance of the kingdom and managed its foreign affairs. Ranavalona tried to stave off colonization by strengthening trade and diplomatic relations with the United States and Great Britain throughout her reign. French attacks on coastal port towns and an assault on the capital city of Antananarivo ultimately led to the capture of the royal palace in 1895, ending the sovereignty and political autonomy of the century-old kingdom. 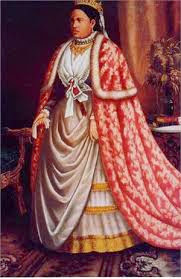 The newly installed French colonial government promptly exiled Rainilaiarivony to Algiers, although Ranavalona and her court were initially permitted to remain as symbolic figureheads. But the outbreak of a popular resistance movement – the menalamba rebellion – and discovery of anti-French political intrigues at court led the French to exile the queen to the island of Réunion in 1897. Rainilaiarivony died that same year and shortly thereafter Ranavalona was relocated to a villa in Algiers, along with several members of her family.

The queen, her family and the servants accompanying her were provided an allowance and enjoyed a comfortable standard of living including occasional trips to Paris for shopping and sightseeing. Despite Ranavalona's repeated requests, she was never permitted to return home to Madagascar. She died of an embolism at her villa in Algiers in 1917 at the age of 55. Her remains were buried in Algiers but were disinterred 21 years later and shipped to Madagascar, where they were placed within the tomb of Queen Rasoherina on the grounds of the Rova of Antananarivo.