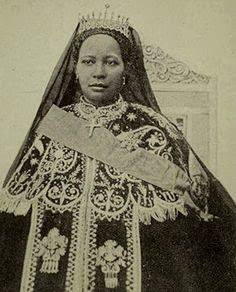 Zewditu I (also spelled Zawditu or Zauditu; Ge'ez 29 April 1876 – 2 April 1930) was Empress of Ethiopia from 1916 to 1930. The first female head of an internationally recognized state in Africa in the 19th and 20...th centuries, her reign was noted for the reforms of Tafari Makonnen (later Emperor Haile Selassie I) and for her strong religious devotion.

Baptised as Askala Maryam ("Askal of Mary," a type of flower), but using the given name Zewditu, the future Empress was the eldest daughter of the then Negus (or King) Menelik of Shewa, the future emperor Menelek II of Ethiopia. Zewditu is an Amharic word meaning "the Crown", though it sometimes appears erroneously Anglicized as "Judith", with which it is not cognate. Her mother, Weyziro (Lady) Abechi, was a noblewoman of Wollo and a brief companion of Menelek. Her mother had separated from Menelik when Zewditu was very young, and the future empress was raised by her father and his consort Baffana. Negus Menelik later married Taytu Betul, but had no children by this wife. Menelik had three acknowledged children: Zewditu herself, a son Asfaw Wossen who died in infancy, and another daughter Shewa Regga, the mother of Lij Iyasu, Menelik's eventual heir. However, the Emperor remained closest to Zewditu, who also had good relations with her stepmother Empress Taytu, and was part of her father's household for most of her life.

In 1886, the ten-year-old Zewditu was married to Ras Araya Selassie Yohannes, son and heir of Emperor Yohannes IV. The marriage was political, having been arranged when Menelik agreed to submit to Yohannes' rule. Yohannes and Menelik eventually fell into conflict again, however, with Menelik launching a rebellion against Yohannes' rule. Zewditu's marriage was childless, being very young during her marriage, although her husband had fathered a son by another woman. When Araya Selassie died in 1888, she left Mekele and returned to her father's court in Shewa. Despite the hostility between Menelik and Yohannes, Zewditu managed throughout the conflict to maintain good relations with both. In a sign of his high regard and affection for his daughter-in-law, Emperor Yohannes IV sent Zewditu back to Shewa with a large gift of valuable cattle, at a point that relations between him and her father were at a particularly low point.

Zewditu had two further marriages, both brief, before marrying Ras Gugsa Welle. Gugsa Welle was the nephew of Empress Taytu, Zewditu's stepmother. Zewditu had already been on good terms with Taytu, but the establishment of a direct tie between the two helped cement the relationship. Unlike her prior marriages, Zewditu's marriage to Gugsa Welle is thought to have been happy.