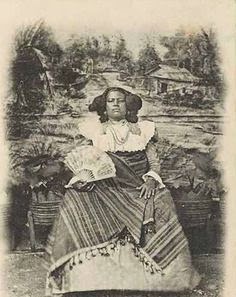 Queen Regnant Binao 1879/80-1923 Madagascar
Succeeded her mother Safy Mozongo of Bemihisatra (1869-79/80). In 1883, the French began a war of punitive expedition against the Merina, the fortresses of Anorontsanga and Ambodiladiro were bombed and destroyed, and Majunga was taken in turn with the help of her fighters. In 1895, the French launched yet another war of annexations and colonial conquest against Merina again with her the assistance and the following year General Galliéni was appointed by the French Governor of Madagascar. She was succeeded by her brother, Amada I (1923-1963).