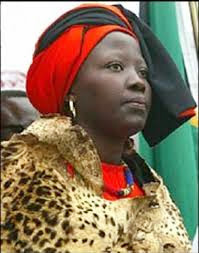 Queen Modjadji is a direct descendant of the once powerful royal house of Monomotapa, which ruled over the Karanga people in Zimbabwe in the 15th and 16th centuries. Rider Haggard’s classical novels King Solomon’s Mines and She drew the world’s attention to the legendary Rain Queen of the Balobedu Peoples.


The Kingdom of Modjadji situated in the Limpopo Province comprises of a rural community of over 150 villages. The Balobedu Kingdom has got a population of more than a million people. Apart from her ruling duties, Modjadji has got the duty of providing her nation with rain.

Many legends are told about the origins of Queen Modjadji. According to one of the most acceptable versions an old Karanga chief from the Kingdom of Monomotapa (south-eastern Zimbabwe), was told by his ancestors in the 16th century that he must impregnate his daughter, Dzugundini. This would bestow on the princess rainmaking powers, which would expand the wealth of his kingdom. This princess was called Modjadji or “ruler of the day”.

Early In the 19th century Modjadji’s tribe, known as the Balobedu, moved further south into the fertile Molototsi Valley, where they founded present day Ga-Modjadji.

According to custom, the Queen must eschew public functions. She communicates to her people via her male councillors and indunas, village headmen. In November of every year she directs the annual rainmaking ceremony at her royal compound in Khetlhakone village. The queen never marries, but she bears children by her close relatives. She is cared for by her ‘wives’, which are sent from the many villages in Ga-Modjadji. When she is nearing death, she appoints her eldest daughter as her successor and then she ingests poison.

For centuries many tribes have respected the Queen’s powers. Even Shaka Zulu sent his top emissaries to request the Queen’s blessings. With the influence of Christian missionaries, many of these traditional customs have been discontinued. In June 2001 both the ruling Queen and her eldest daughter passed away.

An archaeologist of the University of South Africa, Sidney Miller, has excavated the ruins of the original royal kraal. Archaeological finds in Lebweng village include stone foundations, pottery, and middens. In addition these ruins bear resemblance to the famous ruins discovered at Thulamela near Phafuri in the far north of the Kruger National Park and the Great Zimbabwe ruins in south-eastern Zimbabwe. It lends further credibility to the many legends about the origins of Ga-Modjadji.
Source:http://prominentpeople.co.za/modjadji-queen.aspx
Posted by Sandra Rafaela