The Warrior Queens of Dahomey 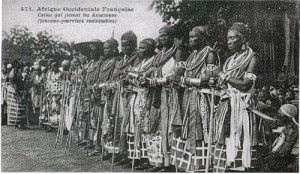 The kingdom of Dahomey, now called Republique du Benin is located in Western Africa, bordered by Togo on the west and Nigeria on the east. Dahomey has a unique feature in its history that reads like something out of Greek mythology – they had Africa’s most well known corps of female warriors.

The origins of the female warrior corps of Dahomey called the Mino, is traced to the 1600s when they were established by King Wegbaja who originally recruited and trained them to be elephant hunters. They later became part of the King’s elite personal guards and then served as community police, palace guards and later transforming into warriors by dint of bravery and training during the 1800s. The women were selected out of groups of volunteering women who wanted a way out of the difficult marriages. Their numbers later swelled by those taken prisoners during war. The women were said to be married to the King to ensure their allegiance and loyalty. They defended him with their lives. The Mino women were tough and accustomed to suffering, fighting fearlessly and never beating a retreat.


According to some history, the women spoke of their lives thus: ‘We are men not women. Whatever town is to be attacked we must overcome it or we bury ourselves in its ruins’.

In his 1891 account “Three months in captivity in Dahomey” E. Chaudoin describes them as follows:

“There they are, 4,000 warriors, the 4,000 black virgins of Dahomey, the monarch’s bodyguard, motionless in their war garments, with gun and knife in hand, ready to leap forward at the master’s signal.

Old or young, ugly or beautiful, they are wonderful to look at. They are as well built as the male warriors and their attitude is just as disciplined and correct, lined up as though against a rope“. Other accounts placed their numbers at about 6000.

The fighting skills of the Mino warriors were first recorded by Missionaries in Abeokuta, western Nigeria who observed them in battle when they attacked that city in the Old Oyo Empire in 1851. Although the armies of Dahomey lost their expedition against the walled city of Abeokuta, the Mino warriors distinguished themselves from their male counterparts by being the only regiment to breach the walled city. They were also observed in battle by the colonial French military, who routed the armies of Dahomey with their fire power in 1892. The colonial army noted the capability of the female warriors. “Armed with double-bladed knives and Winchester rifles, [the Warrior Queens of Dahomey] perform wonders of bravery…” (Captain Jouvelet, 1894). The Mino corps was disbanded by King Agoli Agbo, the last monarch of the kingdom of Dahomey soon after the war when he went into self exile.