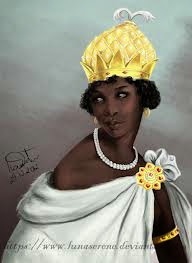 Queen Anna Nzinga (c. 1583 – December 17, 1663), also known as Ana de Sousa Nzinga Mbande, was a 17th-century queen (muchino a muhatu) of the Ndongo and Matamba Kingdoms of the Mbundu people in Angola.

Nzinga was born to King Kiluanji and Kangela in 1583. According to tradition, she was named Njinga because her umbilical cord was wrapped around her neck (the Kimbundu verb kujinga means to twist or turn). It was said to be an indication that the person who had this characteristic would be proud and haughty, and a wise woman told her mother that Nzinga would become queen one day. According to her recollections later in life, she was greatly favoured by her father, who allowed her to witness as he governed his kingdom, and who carried her with him to war. She also had a brother, Mbandi, and two sisters, Kifunji and Mukambu. She lived during a period when the Atlantic slave trade and the consolidation of power by the Portuguese in the region were growing rapidly.

In the 16th century, the Portuguese position in the slave trade was threatened by England and France. As a result, the Portuguese shifted their slave-trading activities to The Congo and South West Africa. Mistaking the title of the ruler, ngola, for the name of the country, the Portuguese called the land of the Mbundu people "Angola"—the name by which it is still known today.