Her Imperial Majesty The Empress of Central Africa Catherine Denguiadé 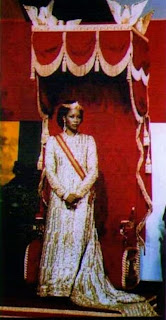 Her Imperial Majesty The Empress of Central Africa Catherine Denguiadé

Catherine Denguiadé (became Her Imperial Majesty The Empress of the Central African Empire at her husband’s accession to the throne), (born 7 Aug 1949, Fort-Archambault (present day Sarh), Chad). Her father was a member of the M’baka clan (he died in 1980) and her mother was Lucienne Tabedje (born in Chad). She studied at Lycée Pie XII in Bangui. Bokassa married her on 20 June 1964. After the fall of the Central African Empire she moved to Laussane, Switzerland. She now lives in Bangui (C.A.R.).
Posted by Sandra Rafaela